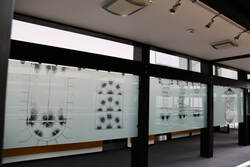 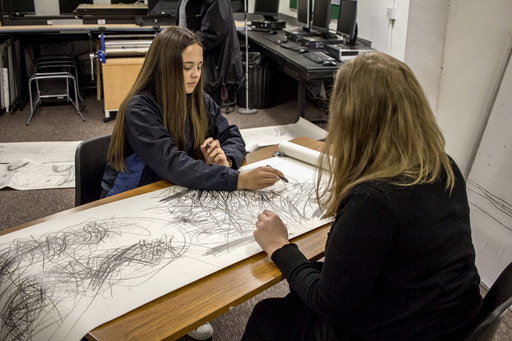 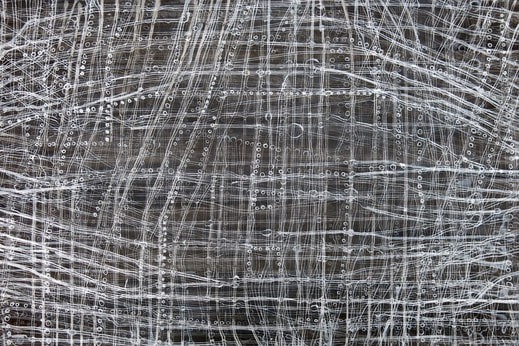 Kiera OToole_Insider Outsider, ink and acrylic on paper (b) 2016
INSIDER/ OUTSIDER,2017
The Model, Sligo,2017
Leitrim Sculpture Centre, Leitrim, 2017
​​​As a returning migrant after ten years residing in Australia, my position as a “liminal personae” is further considered through this body of work titled Insider/Outsider. The work subjectively ‘maps’ the shifting identities which move between being an insider and an outsider resulting in continuously reconstructing and searching for home, homeland and belonging. Within the drawing process, the notion of insider/outsider is both subject matter and method and the drawing emerges “as a coming to know” (Cain,2006).
​Traditional and contemporary Aboriginal artists such as Paddy Bedford, Dorothy Napangardi, and George Tjungurrayi map their inner knowledge of significant and sacred Aboriginal sites through concentric circles, dots and lines which are not literal maps, diagrams or notations but are encoded stories of place and identity. People readily map meanings to space on a page to communicate abstract or concrete ideas, distance, place, relationships and the Aboriginal works of art are evidence, albeit coded, of a deep connection and certainty of place (B. Tversky, 2011, p.515). The concept of mapping is used as a process of enquiry where systems of mapping classification are omitted and narratives and transcribing of space are ignored in favour of map-like grids as sites for speculation. The ‘maps’ do not contain sites of importance or certainty of place rather the chaotic lines are pathways that lead to nowhere and the dots are markers of nowhere in particular and offers no explicit meaning. The resulting drawings are the visible embodiment of a ‘liminal personae’ of lived experiences of migration and returned migration. 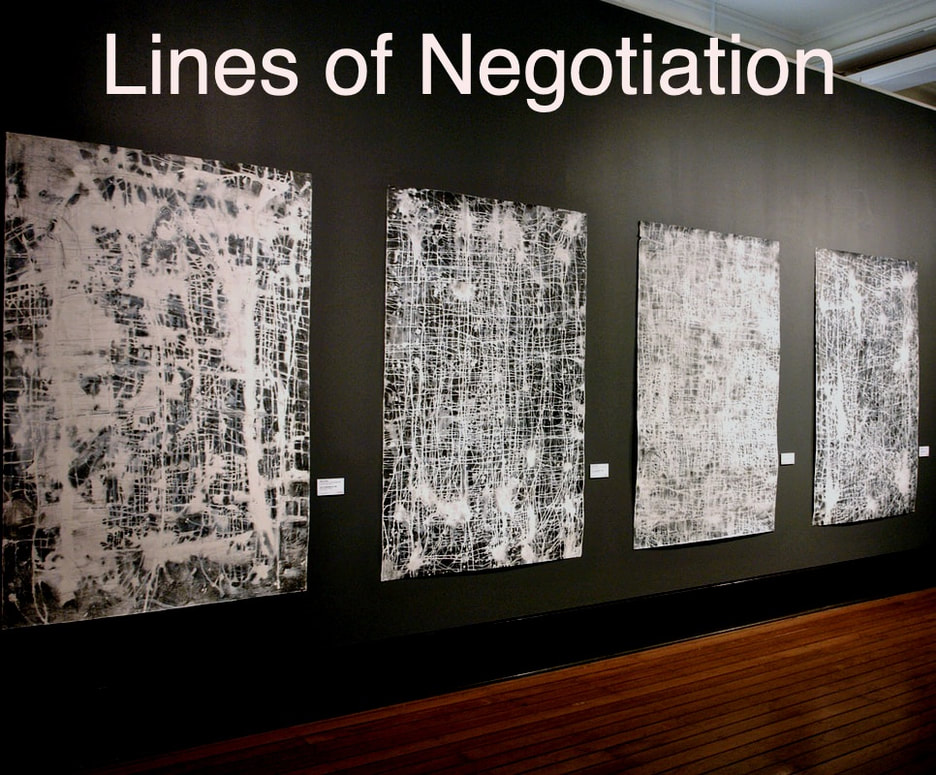 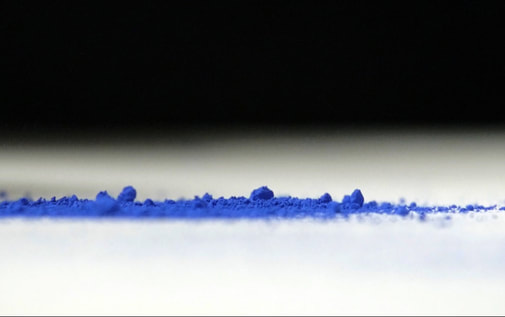 BETWIXT AND BETWEEN, 2015
Tinahely Courthouse Arts Centre, Wicklow. A twelve month residency under the Wicklow Arts Office Strategic Projects Scheme. Funded by Wicklow County Council.
Betwixt and Between
Publications
​BEYOND THE PALE: AUSTRALIA,  2013
National Museum of Australia, 2011
The univeristy of Newcastle, NSW,Australia,2011
The Shopfront Gallery, NSW,Australia 2013 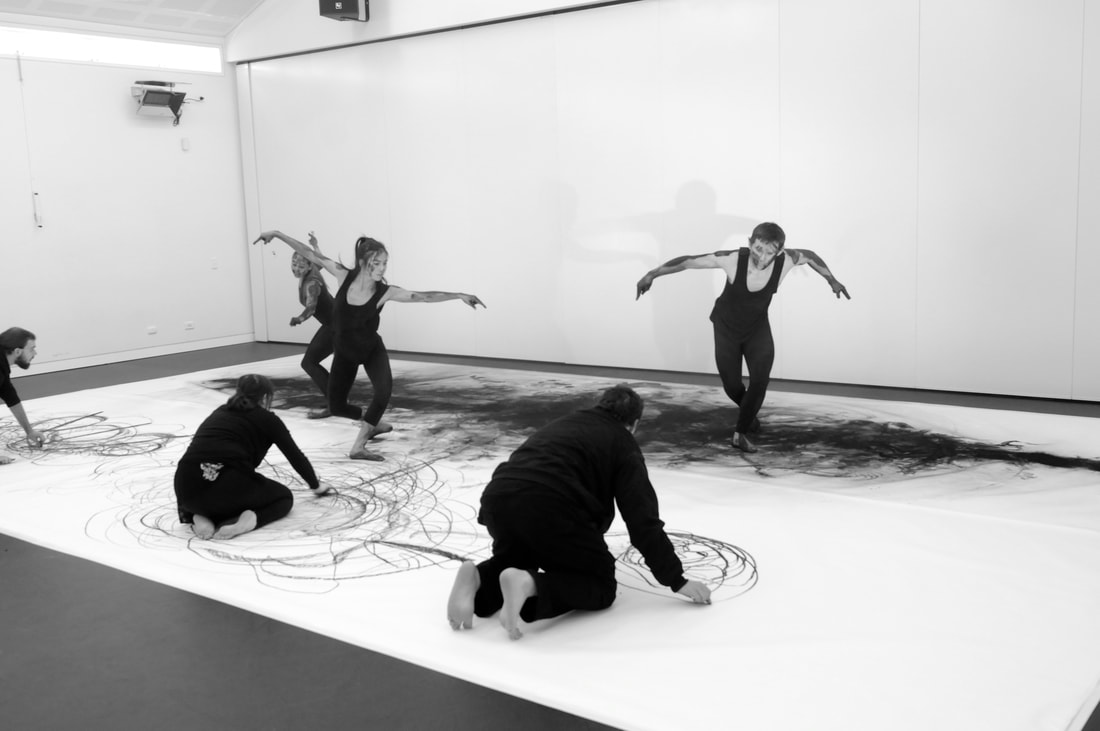 'MARIAN THREAD', 2013
A COLLABORATIVE INTERNATIONAL PROJECT
Visualizing Ireland: Homage to Otherness The Institute of Global Irish Studies, University of NSW, Sydney, Australia
In this practice led research project, artists Annemarie Murland and Kiera O'Toole collaborate on the complexities of Marian Theology as a framework for examining female sexual identity which are shaped by irish and scottish cultural narratives and personal experience as mediators of exchange, the duo explore the Mary story through their respective art practice. The Marian Thread began with project one entitled Homage to Otherness.  ​
In re-imagining the Mary figure, the work sought to broaden my understanding of the profound effect her image holds for me and draw, literally and figuratively speaking, draw my story into the Marian Thread narrative. French literary theorist and psychoanalyst Julia Kristeva observes that if the Marian image is the solitary sacrosanct representation of ‘femininity’ in Western society, then how does the image of the Virgin Mary impact of sexuality and femininity? Mary, as the immaculate prototype for femininity, is grossly insufficient to describe personal experiences as it relates to gender and sexuality, experiences of rape, miscarriage, caesarian and motherhood and the life wounds and battle scars such bodily knowledge’s leave behind.  Can the Virgin Mary become, and I quote Irish writer Colm Tobin on his controversial book, the Testament of Mary, to become “fully human” so Mary as icon becomes an entity that can resonate for me as female today? Interrogation of Marinaism is decoded through fault-lines in the intimate relationship between Mary and myself by means of a material dialogue to become the site for an intercession between self in place, femininity and the Blessed Virgin Mary.

'Negotiating Surface','Opening the box', 2013, graphite, acrylic, masonite board. 4 Point Gallery, NSW, Australia.
From an intuitive process of drawing, a subjective dialogue of enquiry negotiates the shifting and unpredictable conditions where drawing begins to draws itself. Taking an approach towards drawing that is open-minded, unknowing and inquiring, opportunities arise to generate conditions where the unfolding of unexpected embodied and tacit knowledge can emerge. :
(The Pandora Group is Opening the box with an invitational exhibition of women artists with similar sensibilities curated by Linda Swinfield) Enquiry into conceptual and abstract aesthetics that stretches over a six year history as a group to other artists. All the artists original and invited have similar concerns that link family, abstraction, representation, place, memory and identity.  ​

'ACTS OF DRAWING', 2013
IN COLLABORATION WITH DR ANNEMARIE MURLAND, 2013, NEWCASTLE UNIVERSITY, NSW, AUSTRALIA
BLANK PIECE OF PAPER, NO PREPARATION, NO NARRATIVES, LIMITED MATERIALS...DRAW.
'HOUSE', 2013
Using natural materials of Australian of gum nuts seaweed and balsa wood, gold leaf. the work explores notions of personal and cultural identity from the perspective of a being a migrant.
Abhaile, 2013
Snamh, 2013 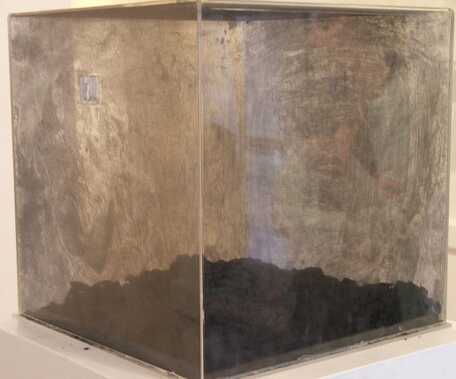 ​All rights reserved. No part of the website maybe reproduced without written prior consent of Kiera O’Toole.